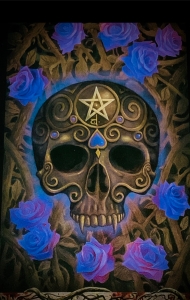 “Not many people get this opportunity.” She said, low and soft.

The man looked at the woman. “Why are you offering it to me then?”, he managed to gasp.

“Think of it as a gift.” She said with a small smile on her lips.

“Time is running out. You should decide soon.” She said.

“Will it be painful?” has rasped out.

“How long will it take?”

The man looked at the canopy of his bed, a million thoughts running through his head.

The woman smiled a patient smile and replied, “Because you are a good man.”

The man was quiet once more. The offer was tempting. He had been in pain for quite some time, however the past few months have been the worst. The disease slowly drained his life, leaving his body wracked in chronic pain and rendering him unable to do much more than wheeze and thrash in his bed.

“You are one of the few who has the opportunity to decide when you will die. However, if you wait too much longer, fate will decide for you.”

He knew what the woman said was true. The physicians have all told him the same thing. His time was short.

He knew that too. The physicians have all said it will only get more painful. More difficult to breath. There are only so many pain medicines the can give. It will get much more painful before his mind finally gives in. This woman is offering him a painless death, on his own terms. Something he has wished for many times in the past few weeks.

Now that Death has come to answer that wish, he was frightened.

The halls were quiet with the exception of the occasional scurrying mouse. The fire crackled in the hearth. The wind puffed against the window panes. For a brief moment a memory of long ago rose up in his mind’s eye. That night was much like this one, his wedding night. His wife lay beside him in the bed on that night. They spoke of the future when they weren’t learning each other’s bodies. It was a good night…that night.

A loud pop from the fire brought him back to the present. For a moment he had forgotten the pain in his body…lost in the memory. His eyes swiveled to the woman once again.

“My family? What will happen to them? Will they see? Will they know?” the man asked with a sudden fear of appearing weak.

“They will go on without you, as all that are left behind must. They will see and know only what you want them to know. If you want, they will think it was the natural course. No one will know but you and me.”

“How would you do it?” the man asked.

The woman showed him a tiny bottle she held in her hand. “Simply drink this when you are ready.”

“How long will it take?”

“The pain will subside first then sleep will take you.”

The man thought once again. He had wished for this. For the pain to end. To be at peace. It seemed almost too good to be true.

“Because, you are a good man and have done many good things for a lot of people. It’s the least you deserve.”

The man wondered if other good men were given the same choice.

“But, you must decide soon. The time is approaching where it will be out of my hands.” The woman pressed the tiny bottle into his hand. It felt cool and smooth. His fingers curled around the bottle. He began to think of his wife and son. He thought about how hard it has been on her to watch his decline. He thought of all the work his son had taken on as his the illness slowly took hold. Peace would not only be his. It would be for them as well. They could move out of this state of caretaker limbo.

The man brought the bottle up so he could see it in the light. Such a tiny thing. You would think Death would look different. Bigger. More. Not a tiny little bottle barely the length of his thumb. He turned the bottle in his hand and looked at it in the light. It was blue glass with a bulb at the bottom and a long neck that ended with a cork.

He looked at the woman again. She smiled a small patient smile. The kind you give to children that are trying to learn something new for the first time.

Death by Idgie Stark is licensed under a Creative Commons Attribution-NonCommercial-NoDerivatives 4.0 International License.